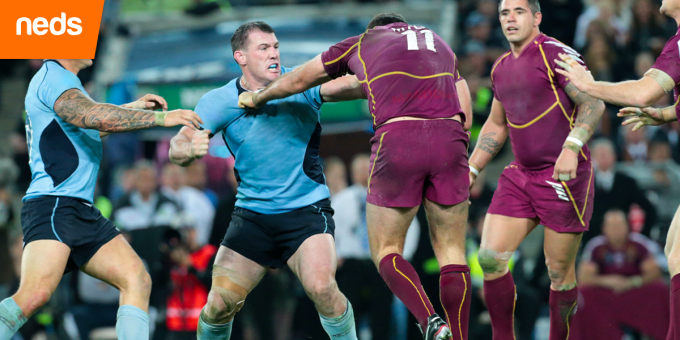 This time of year really brings the absolute worst in people. The second that State of Origin rolls around, your lifelong friend who happens to be from south of the Tweed River despises you. Mates who would have your back through anything send you abusive messages and are suddenly insufferable to hang out with.

That’s one of the things we love about State of Origin though, the tribalism, the hatred. The mate vs mate, state vs state slogan is very real, and it’s not just played out in living rooms across the country – it happens on the field as well.

Bloke’s who may spend all year together at a club could end up punching on, players who are normally very regular human beings turn into grubs and the blokes who are grubs at club level take their game to the next level and become flogs.

Rugby League fans have a love/hate relationship with grubs. You turn a blind eye when they’re on your team but if they are against you, the punters will unload on them. Queensland and New South Wales have had their fair share of grubs & flogs.

To celebrate State of Origin kicking off tonight I thought I’d rev up the punters by listing some of the players we all love to hate. For bias sake too, I might include a couple Queenslanders.

The man that ruined Origin for future generations.

Paul Gallen’s cowardly and unprovoked punches on a poor, defenceless Nate Myles in 2013 is the reason Rugby League players can’t throw them anymore. If you’re like me and are sick of the little huddles that players run into where they give each other a shove and a kiss. You can blame Paul Gallen for that.

Not to mention he was a massive whinger. Often, he would sook to the ref about things Queenslanders were allegedly doing in a tackle (twisting legs, hands in the face) only to be doing them himself when the Blues were on defence. What a flog!

Did you know that Gal only won one series too, sucked in!

Nate Myles loved to get a bit grubby in a tackle. Headbutts, swinging arms, leg twists, knees even. The big fella had every trick in the book up his sleeve and got away with nearly all of it.

He loved to hurt New South Welshmen and we as Queenslanders could get around that. Did he deserve to get his jaw spun by Gal? Probably but if New South Welshmen weren’t so precious and borrowed a few tricks from Nate maybe we’d still get to see the boys throwing hands.

He was a grub at Manly and took it to another level for Origin. If you were tackled by the Blues “enforcer” you were in for an onslaught of elbows, headbutting and he loved a cannonball too.

A scrap was always not far away when Watmough was in around the ruck but I only ever remember him being third man in which is pretty on brand for him.

Big Charlie Webb was nothing but pure aggression and that’s why we as Queenslanders loved him but those blokes south of the border… Not so much.

One of the biggest State of Origin moments ever involves Carl. His reaction to a high shot from Luke Bailey not getting penalised which lead to that famous photo of him squaring up with the Q carved into his head. What people forget is the next two tackles where Webb jams Bailey twice more and then wins QLD the ball after giving away two penalties.

That passage of play there summed up perfectly why Queenslanders loved him, and Blues fans hated his guts.

Bird is right up there as one of the blokes despised by Queenslanders the most. It’s very hard to find footage of him online making a tackle below the neck.

Brent Tate got him flush during a melee in 2012 and Queensland got the penalty! How good!

Bird was notorious for his niggle and had an incredible ability to get under Queensland’s skin, his dangerous lifting tackles probably help with that. Nothing gave me more satisfaction growing up than watching Birdy get smashed. What a grub!

Moose! The Queenslander is notorious for being a pest on the field. Late hits, eye gouges and headbutts are just a few of the things you’ll cop from Moose if you’re in a Blues jersey.

It’s been rumoured as well that McGuire Facebook stalks his opposition before a game to find dirt on you and make his sledges personal. Brutal stuff from the Queenslander, he’s had his fair share of time on the sidelines for let’s call them “Ruck infringements”.

These blokes certainly loved to let their hatred for the opposition fly when they were on the field and its characters like them that make State of Origin as exciting to watch as it is.

The game needs flogs, dogs and grubs regardless of how you feel about them I can’t imagine Origin being remotely as interesting as it is with out these guys. I just wish that they could belt each other again.

Who do you think is the biggest flog to ever play Origin? Leave us a comment on Facebook.