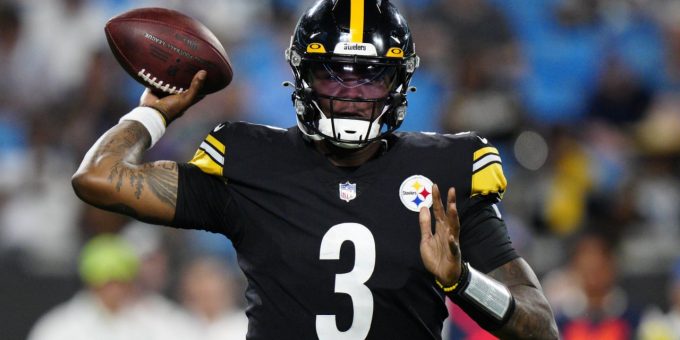 Steelers backup quarterback and former Ohio State standout Dwayne Haskins has died at the age of 24.

ESPN’s Adam Schefter reported the news on Saturday morning, saying that Haskins was hit by a car in South Florida that morning. His agent Cedric Saunders relayed the news.

Details of the incident have not yet been released.

The quarterback was training with other Pittsburgh quarterbacks, running backs and wide receivers in South Florida, including Mitch Trubisky, Najee Harris and Pat Freiermuth, over the past few days. Just yesterday Haskins was posting videos and seen in photos of the crew during their training.

“I am devastated and at a loss for words with the unfortunate passing of Dwayne Haskins,” Steelers coach Mike Tomlin said in a statement. “He quickly became part of our Steelers family upon his arrival in Pittsburgh and was one of our hardest workers, both on the field and in our community. Dwayne was a great teammate, but even more so a tremendous friend to so many. I am truly heartbroken.

“Our thoughts and prayers are with his wife Kalabrya, and his entire family during this difficult time.”

Haskins, a former first-round pick, started for the Commanders for two seasons (2019, ’20), finishing with a total of 2,804 yards and 12 touchdowns. He only started in a total of 13 games for them.

In January 2021, the Steelers picked up Haskins as their third-string quarterback behind Ben Roethlisberger and Mason Rudolph. Haskins never saw playing time in his two years on the team.

He did play in four preseason games in his time in Pittsburgh, starting one of the