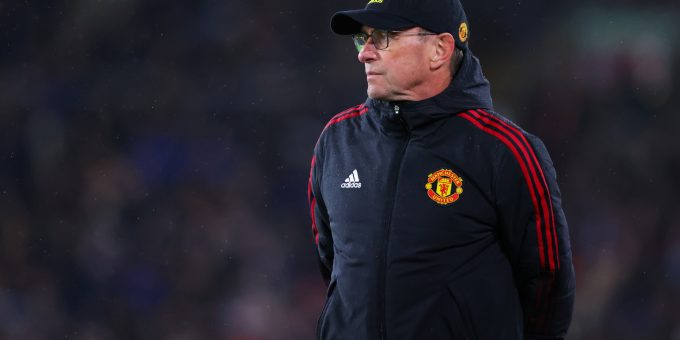 The Red Devils remain sixth in the standings, but they have slipped six points behind the fourth-placed Gunners, who claimed the victory thanks to a first goal in English football for Nuno Tavares, a Bukayo Saka penalty and a wonder strike from Granit Xhaka.

Cristiano Ronaldo did briefly pull United back into it during the first half thanks to his 100th Premier League goal, but it ultimately proved in vain as the visitors slumped to a third defeat in four games, with Rangnick acknowledging after the match that their hopes of securing Champions League football for next season are now over.

When asked if Man Utd’s top-four chances have gone, Rangnick said: “Pretty sure. For me even before the game it was not very likely but after today’s result it is gone yes.”

The victory for Arsenal has once again put them in the ascendancy to claim a top-four finish, especially as north London rivals Tottenham Hotspur, who started the day in fourth, were held to a goalless draw at Brentford in Saturday’s late kick-off.

Elsewhere, Manchester City (2/5 – Premier League Outright) have moved four points clear of Liverpool (15/8) at the top of the standings following a Gabriel Jesus-inspired 5-1 victory over Watford at the Etihad Stadium.

Brazil international Jesus scored four of City’s five goals, assisting the other for Rodri, while Hassane Kamara struck for Watford, but the Hornets appear doomed for the drop following a fourth straight defeat.

City will now be hoping Everton can do them a favour in Sunday’s Merseyside derby with Liverpool at Anfield (Liverpool 2/11, Draw 6/1, Everton 12/1 – Match Betting), but boss Pep Guardiola believes nothing has changed in the title race.

He told Sky Sports: “Nothing changes. When we won against Brighton we were two points behind [before the game], now we’re four in front. Brighton was a ‘final’. We had another ‘final’ today and we won it. Now we have an opportunity to play a ‘final’ against Leeds.

“Nothing changes. We have to win all five games to be champions.”

Like Watford, Norwich City appear to be all but relegated after they were beaten 3-0 by in-form Newcastle United at Carrow Road.

Joelinton was the star of the show for the Magpies, netting a brace on what was his 100th Premier League appearance, with Bruno Guimaraes also getting on the scoresheet.

The day’s other game will not live long in the memory, as Leicester City, perhaps with one eye on the first leg of their Europa Conference League tie with Roma on Thursday (Leicester 6/5, Draw 23/10, Roma 2/1 – Match Betting), were held to a goalless draw by Aston Villa at the King Power Stadium.