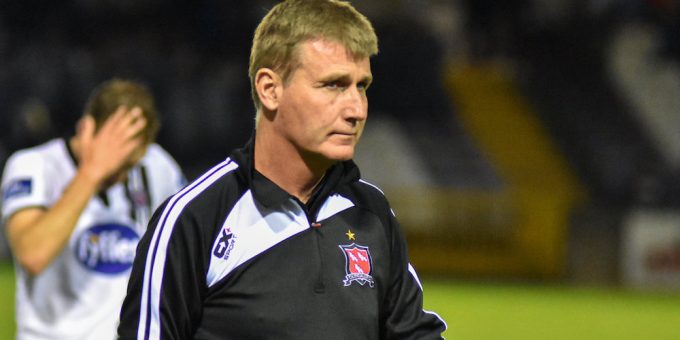 Republic of Ireland manager Stephen Kenny has shrugged off suggestions his position is coming under pressure ahead of his side’s big Nations League showdown against Scotland on Saturday in Dublin (Ireland 17/10, Draw 2/1, Scotland 9/5 – Match Betting).

Ireland are bottom of Nations League Group B1 with no points on the board after successive 1-0 defeats to Armenia and Ukraine so far.

They are facing the prospect of being relegated down to Group C unless they can stop the rot against Steve Clarke’s men, who kicked off their campaign with a 2-0 victory over Armenia last time out.

However, despite their poor start, Kenny says he doesn’t feel under pressure, although he conceded he was disappointed to not have gained any points from their opening two games in the competition this year.

“No, I don’t feel pressure, only internally,” he said. “There’s professional pride that we don’t have points on the board.”

Kenny has injury concerns to deal with for the Scots’ clash, which gets underway at 17:00, with captain Seamus Coleman (groin) and John Egan (ankle) both out, while reports from Ireland say Callum Robinson will be dropped after two underwhelming displays up front with Michael Obafemi tipped to come in in his place for his first senior start.

Kenny knows Ireland need more goals as they have managed just one in their last three games but he was coy on what changes he may make against Scotland as he didn’t want to hand Clarke any vital pre-match information.

He added: “I am not going to discuss my team selection, that wouldn’t be the wisest thing to do as a coach. There is a difference between tactics and style of play. The style of play won’t change, we are committed to that regardless. Tactically we always have to adapt.

“We have fresh legs and we have other players who are willing to come in and make their mark. That is the nature of it. We have some players who are fresh and ready to go, we want that freshness to come into the team and give us energy.”

Scotland and Ireland have somewhat surprisingly only ever met 11 times previously, with the head-to-head record being equal with four wins apiece and three draws between them. The last clash, a Euro 2016 qualifier at the Aviva Stadium seven years ago, ended all square at 1-1.

Ireland take on Ukraine in the group on Tuesday in Lodz in Poland, while Scotland go to Armenia.

Wales are also in action in the Nations League when they host Belgium later, with the clash at the Cardiff City Stadium set for a 19:45 kick-off. Wales are 3/1 for victory, the Belgians are 19/20 and the draw is 5/2.

Robert Page’s side may still be on a high after securing their place at the World Cup later this year but they have started their Nations League campaign poorly, with two 2-1 defeats to Poland and Netherlands. Belgium were hammered 4-1 by Netherlands in their opener before they responded well to beat Poland 6-1 in their second clash in Group A4.