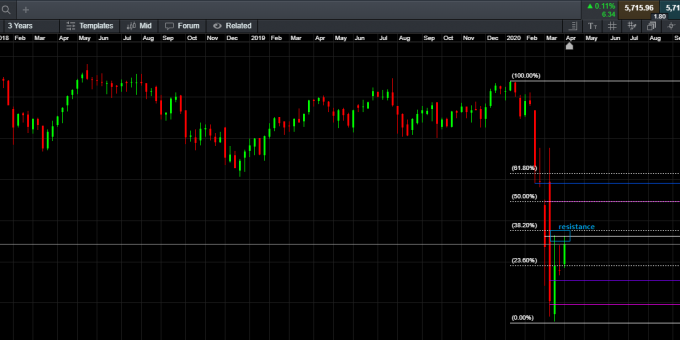 The UK 100 was able to stage some form of recovery this week on the back of generalized positive sentiment in global stock markets. The only bleep for the week occurred on Tuesday when news of UK PM’s hospitalization hit the markets. However, this was quickly shaken off and positive sentiment continued to lift the UK 100 , but not by much. The domestic situation with COVID-19 continues to constitute serious headwinds for the UK 100 , and this has limited the upside on the index.

The UK 100 is marginally higher today (0.16%) as markets prepare for the Easter weekend holiday. Banks are expected to close tomorrow and trading volumes are likely to be thin on the day.  Today’s very small rally is being led by oil stocks, which are gaining after a lift in crude oil prices. The crude oil markets have their sights on the OPEC + meeting, which is expected to come out with a statement today on possible production cuts. There is optimism that the major players are tired of the price war which has really not been to their benefit, and may strike a consensus deal to reduce output and send prices higher.

However, any upside from the UK 100 is also being weighed down by Tesco’s shares, which took a hit on Wednesday after the company reported rising costs that could hit up to 925 million pounds, despite a 30% surge in sales revenue. The company had to hire 45,000 additional workers to cope with the pressure from panicked shoppers itching to stock up in anticipation of possible lockdowns in the UK.

The top gainers in what has been a generally good week for the UK 100 include:

Carnival has emerged as this week’s biggest winner, after the Saudi Sovereign Wealth Fund reportedly acquired an 8.2% stake in the troubled cruise company. Carnival and other companies involved in the tourism and holiday sectors have borne the full brunt of the COVID-19 pandemic. Carnival’s stock had fallen 70% since January 2020. The entrance of the Saudi Sovereign Wealth Fund may just be the tonic the company needs to start a turnaround in fortune.

This week’s top losing stocks on the UK 100 are:

Most of the global stock markets have had a bullish week as they try to recoup some of the losses sustained in March 2020. The UK 100 is no different. On the weekly chart, the candle for the week is seen touching off the 5811.96 resistance level, formed by the previous high of the weekly candle that ended March 21. This area is close to the 38.2% Fibonacci price level that occurs at 5880.92. Therefore, we can think of the current levels as a resistance zone that has 5811.96 as the floor, and 5880.92 as the ceiling.

To get a better feel of price action in the short term, the daily chart is used. This chart reveals what looks like an evolving “W” harmonic pattern. The current upward leg of price movement can be deemed to be the wave that extends from the higher low (point C), and searching for a termination point known as D.

The current price action candle is testing the neckline of the W pattern. A break above this line must be confirmed by two successive daily candle closing penetrations above the current resistance line. If this happens, then the door will be opened for price to target the next resistance at 6228.08. This is also the site of the 50% Fibonacci retracement line as well as previous highs of March 9/10. Further advance of this breakout move may target 6453.06, where previous lows of February 28 and March 2 are found.

On the flip side, continuation of the downtrend has to occur from the point D on the W pattern. In this case, we have to consider if the W pattern is a Gartley pattern or a butterfly pattern. The Gartley pattern has point D as the 78.6% Fibonacci retracement from point X to point A. This would effectively place point D at the 12 March candle high of 5908.47. If we see price rejected at that price level with a downward leg thereafter, it will be safe to say that the price reversal within the context of the bearish Gartley pattern has started.

If the pattern ends up being a butterfly pattern, then point D would have to be located at the 127.2% extension from point X to point A. This would put point D tentatively at the 6453.06 resistance area, in which case the price rejection and reversal would be expected at that point.

Bulls would need a break of 6453.06 to invalidate the evolving “W” harmonic pattern and usher in further upside recovery on the UK 100 .

Bears need to wait to see if a point D forms on the “W” harmonic pattern as indicated above. Point D is expected to be above the current resistance. If price extends upwards before reversing, 5880.52 becomes a new support. Therefore, bears should wait for a break of 5880.52 after price has started a reversal to confirm further bearish action on the UK 100 .