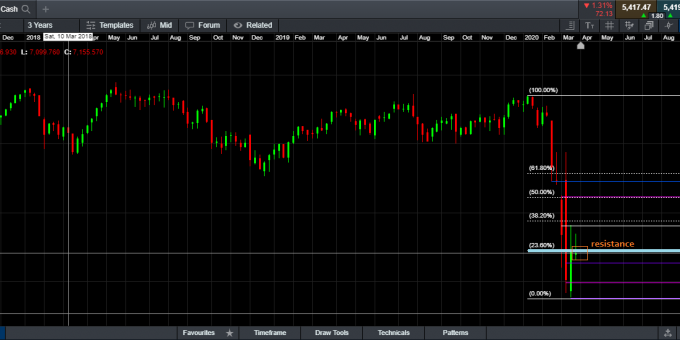 The UK 100 was able to stage some form of recovery this week on the back of positive sentiment in the market which arose from expectations that the various stimulus packages from the Bank of England and the US government would start to kick in. However, upside moves remained limited due to the expanding scope of the coronavirus outbreak in the UK.

The UK 100 is presently down 1.58% on the day, dragged down majorly by insurance stocks which are reacting negatively to the decision by EU insurers to stop payment of dividends in an attempt to cushion against the economic shocks caused by the coronavirus pandemic.

The UK 100 was initially dragged down earlier in the week by oil majors, who have borne the brunt of the steep falls in the prices of the crude oil benchmarks. However, renewed optimism about a meeting between Saudi Arabia and Russia to agree on production cuts as mandated by President Donald Trump lifted crude oil prices on Thursday, putting some oil stocks into the gainers’ list for the week.

This week’s top losing stocks on the UK 100 are:

Today’s price analysis starts on the weekly chart. We can see that the UK 100 found it difficult to sustain last week’s rebound, and any gains for this week have largely been eroded, forcing the weekly candle into a hammer that sits just below the 5418.37 resistance line. This resistance is also reinforced by the 23.6% Fibonacci retracement from the swing high of 11 January 2020 to the swing low of 21 March 2020.

The weekly candle is presently shaped like a hammer, and its location just under the key resistance could portend further bearishness if it remains as it is for the rest of the trading day.

The daily chart shows price action for the week locked in a symmetrical triangle pattern. Price must break either border to determine the direction of the UK 100 next week. The bias for this setup is bullish, since price entered the triangle from below. However, only a breakout will indicate which border price will choose to continue from.

A break above the triangle must be confirmed by two successive daily candle closing penetrations above the current resistance. If this happens, then the door will be opened for price to retest the 5811.9 resistance. Further extension of the breakout move above this resistance could then target the next resistance target at 6233.40 (highs of the weeks ended March 13 and March 20).  The 6453.06 price level could become relevant if the price recovery is robust enough to breacj 6233.40.

On the flip side, a downside break of the triangle would allow the UK 100 to retest 5275.7 and the cluster of lows at 4981.9. Below this area, the 4759.7 support level (1 August 2011 and 23 March 2020 lows) lurks underneath. This price move would get support if the weekly candle stays as it is: a hammer lurking underneath a resistance level.