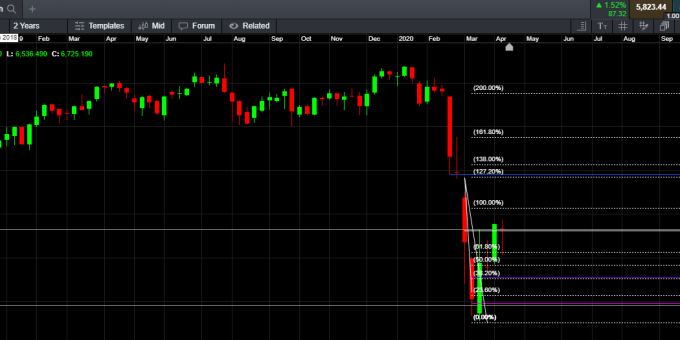 After a lackluster to the week which was a day short due to the Easter weekend holiday, the UK 100 was able to stage further recovery on Thursday, as signs that the US would soon reopen for business lifted the mood of investors across the Atlantic. Today’s price action is also seeing a bullish spurt, albeit on low trading volumes, as earnings numbers from Rip Tinto surprised the markets. Higher-than-expected quarterly production numbers enabled Rio Tinto stocks to move up by more than 5%, and also provided a fillip for other mining stocks such as Glencore and Peers PHB Group to push higher on the day.

These gains follow the Tuesday and Wednesday trading sessions that were mostly dominated by risk-off sentiment and a higher British Pound, which gained on news of UK PM Boris Johnson’s release from intensive care as he recovers from his coronavirus infection.

News of the production cut deal from the virtual OPEC + meeting over the weekend did little to push up oil prices, and contributed to the risk-off sentiment which saw the slump on the UK 100 on Tuesday and Wednesday. A weaker pound this Friday is also helping to sustain bullish sentiment on the UK 100 as the UK prepares for the extended lockdown announced yesterday.

The top gainers on the UK 100 this week include:

The Top Losers chart is dominated by stocks such as:

The composition of the losers’ chart is not exactly surprising. Oil stocks continue to get hammered by low crude oil prices, and the UK banking downgrades by Credit Suisse have hurt stocks of the top UK banks in the past week.

Unlike its counterpart markets in the US, the was unable to make significant headway to the upside, and has failed to break the 5811.96 resistance level, formed by the previous high of the weekly candle that ended March 21. As noted in the last analysis, this price level is very close to the 38.2% Fibonacci price level, which is located at 5880.92. Thus despite price being located at 5823,94 as at the time of writing, the resistance zone bordered by 5811.96 as the lower barrier, and 5880.92 as the upper barrier remains intact.

The weekly candle presently resembles a doji, which shows the current indecision between buyers and sellers on the UK 100 .

The daily chart shows that price rejection at the current resistance may lead us to be tempted to call that price level as point D in the “W” harmonic pattern. However, price has not made much progress to the downside from that point, which is atypical for the pattern. We will therefore abandon attempts at looking at the price action as a W pattern and rather, look at the support-resistance levels as a determinant of future price action.

Today’s price candle opened with an upside gap. Attempts to close this gap succeeded briefly, but price has continued to the upside ever since and is now challenging the resistance level, albeit with very low trading volumes for the day.

A break above this resistance requires two successive daily candle closing penetrations above that level. A successful break opens the door towards the next resistance at 6228.08 (50% Fibonacci retracement line and March 9/10 highs). Further advance could target 6453.06, where previous lows of February 28 and March 2 are located.

Conversely, a failed break of the resistance could lead to price rejection at that point, which offers UK 100 sellers the opportunity to force things their way, targeting initially the support targets found at 5450.50 (23.6% Fibo retracement), 5275.79 or quite possibly the cluster of lows at 4981.9. The lows of 1 August 2011 and 23 March 2020, which congregate at 4755.38, may constitute the next support level if 4981.90 is unable to provide a support for any downward momentum.

A breakdown of the 5567.59 support area is enough for bears to continue pushing price action downwards.