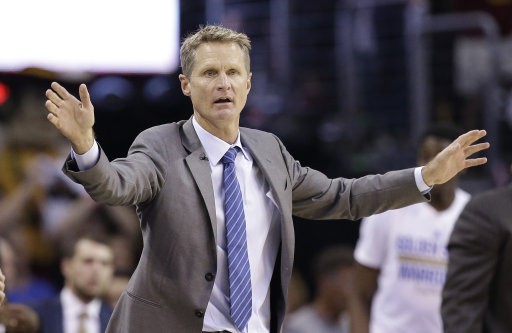 Brooks was ejected after he fractured Payton II’s elbow in the incident early on in Memphis, fouling the GSW man when he went for a basket, and Kerr was fuming afterwards, saying Brooks had crossed the line of what’s acceptable on court.

“I don’t know if it was intentional, but it was dirty,” Kerr said, in quotes carried by BBC Sport. “Playoff basketball is supposed to be physical, everybody’s got to compete, everybody’s got to fight for everything but there’s a code in this league that players follow.

“You never put a guy’s season or career in jeopardy by taking somebody out in mid-air and clubbing him across the head and ultimately fracturing Gary’s elbow. Dillon Brooks broke the code. That’s how I see it.”

The Grizzlies won on the night 106-101, with Ja Morant top-scoring with 47 points to square the best-of-seven series at 1-1.

Memphis are 16/1 to eventually progress from here and win the NBA Championship this season, with game three of the series taking place in California on Saturday.

In the Eastern Conference, Jaylen Brown scored 30 points and Jayson Tatum 29 as the Boston Celtics comfortably saw off the Milwaukee Bucks 109-86 to bounce back and also level their best-of-seven series at 1-1.

They next square off at the Fiserv Forum in Milwaukee in game three on Saturday and the Bucks are 11/10 to win the series, with Boston 8/11.

Wednesday night’s NBA playoff action sees Miami Heat face the Philadelphia 76ers in game two of the other Eastern Conference semi, with Miami 1-0 up (Money Line – Heat 2/9, 76ers 10/3), while the Phoenix Suns play the Dallas Mavericks in the West with the Suns 1-0 in front in the series (Suns 3/8, Mavericks 21/10 – Money Line).