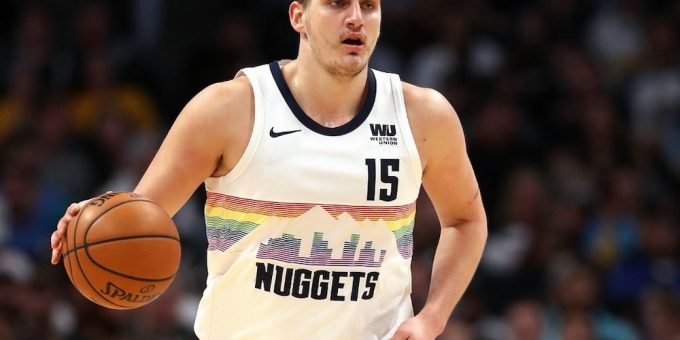 MVP candidate Nikola Jokic sees no reason why the Denver Nuggets cannot make history after they avoided a whitewash in their first-round play-off series with the Golden State Warriors.

The Nuggets had lost their opening three games of the series, but inspired by a 37-point haul from talisman Jokic, they were able to claim a 126-121 victory at the Ball Arena on Sunday to reduce the arrears to 3-1.

No team in NBA history has ever recovered from a 3-0 deficit in a best-of-seven series to go on and win, but Jokic, who is set to compete with Giannis Antetokounmpo of the Milwaukee Bucks and the Philadelphia 76ers’ Joel Embiid for this year’s MVP award, believes the Nuggets are capable of making history.

“We didn’t deserve to get swept…The odds are all against us,” Jokic said postgame. “But you know, we’ve really freaked the odds a couple times. So, why not?”

Golden State will have home-court advantage for Game Five of the series which will take place during the early hours of Thursday morning (Warriors 2/9, Nuggets 10/3 – Money Line).

Elsewhere in the play-offs, Brandon Ingram and Jonas Valanciunas were the stars as the New Orleans Pelicans levelled their series with the top-seeded Phoenix Suns at 2-2 following a 118-103 win at the Smoothie King Center.

Ingram top scored with 30 points, while Valanciunas hit 26 points and 15 rebounds to keep the Pelicans in with a realistic chance of causing a major upset.

Reigning champions the Milwaukee Bucks moved to within one game of the Conference Semifinals, as they claimed a 119-95 win over the Chicago Bulls to go 3-1 one up in their series.

It is a similar story for the Miami Heat, who also hold a 3-1 series lead over the Atlanta Hawks after Jimmy Butler inspired them to a 110-86 victory in Georgia.

The NBA play-off action will continue overnight and three teams can book their places in the Conference Semifinals, including the Boston Celtics, who could seal a 4-0 series whitewash over the Brooklyn Nets (Money Line – Nets 20/23, Celtics 20/21).