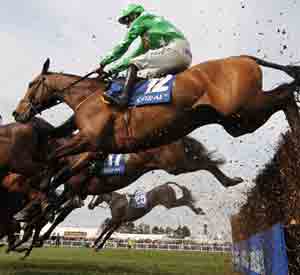 Trainer Dermot McLoughlin won the Irish Grand National for the second year in a row with 40/1 shot Lord Lariat triumphing at Fairyhouse.

He said: “I was delighted coming here today with a ride. Dermot was quietly confident that he’d run a big race if we could get him out, get him jumping, travelling away, get him in his rhythm. He’s been fairly spot on; he’s done the job.”

Meanwhile, trainer Nicky Henderson and owner Michael Buckley have ruled out Supreme Novices’ Hurdle winner Constitution Hill taking on unbeaten Champion Hurdler Honeysuckle in what would have been a fascinating showdown in the Punchestown Champion Hurdle.

It was thought the pair would take each other on next week in a race Honeysuckle is 1/5 to win, but Buckley, speaking to Sky Sports Racing, said: “I saw him this weekend, and Nicky Henderson and I think it’s right. He looks ready for the field for now.”

Henderson admitted they had been tempted to put the five-year-old up against Honeysuckle following his superb 22-length victory over Jonbon in the Supreme Novices’ Hurdle at the Cheltenham Festival, but the team has decided against it.

Henderson indicated he hopes the pair will eventually meet, and he remains very excited about what the future holds for Constitution Hill, who is available at 2/1 to win next year’s Champion Hurdle at the Cheltenham Festival.

Henderson told the Nick Luck podcast: “We’d been umming and ahhing for a good fortnight now. It was very tempting, but we had the horse all prepped up for Cheltenham. Bear in mind he’s still a big, quite raw, five-year-old. He’s only had three races in his life. His future is so big.

“I think he can be a better horse, more built-up and stronger, in a year’s time, and I’d rather finish on a good note with it all in front of him. There’s all the time in the world to meet Honeysuckle, and hopefully, it will be in March.

“Constitution Hill will definitely stay over hurdles. He can have a proper campaign next season, but to go over there and do this against what is undoubtedly a very, very good mare wasn’t something in his interest or to his benefit.”