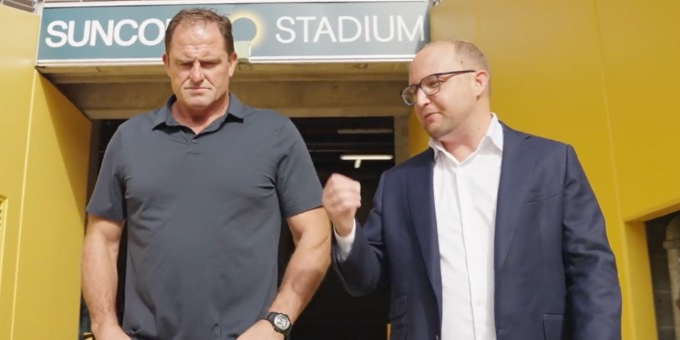 Footage has emerged of Queensland State of Origin and North Sydney Bears legend Billy Moore walking out on a TV interview with hard-hitting journalist and host of the Neds NRL Punting Podcast, Chris Garry.

In what was meant to be a run-of-the-mill feature leading up to the 2022 State of Origin series, Moore refused to say the line “Queenslander” when walking down the race at Suncorp Stadium.

Moore, who played only the 17 games for the Maroons made the catchcry “Queenslander” famous walking down the tunnel prior to game 1 of the 1995 State of Origin series and has been living off it ever since.

When asked about what he said going down the tunnel by Chris Garry, Moore said “Actually mate, I don’t recall.”

Mr. Garry tried to remind Moore about the chant, hinting that it was three syllables and a state, but Billy wouldn’t budge.

Despite the efforts of Garry to get Moore to give the “Queenslander” chant on camera, the 211 gamer for the North Sydney Bears and New South Wales born Rugby League great appeared not to budge.

“…we went through this last year. You (the media) have got the file footage. Just use that.”

However, Mr Garry who has recently developed a reputation as the resident shock jock on the Neds NRL Punting Podcast hit back “We literally paid you to say one word. Your entire career has been built off of one word. Can you just f****ng say it?”

Moore back in the days when he wanted to say “QUEENSLANDER”

In what was some of the tensest and most dramatic interviews captured in Rugby League this year, Moore proceeds to walk out of the interview claiming “I can’t do this. I’m out. I’m done. Done”

Many pundits have likened Moore’s activity to that of Mal Meninga’s announcement of his intention to run for parliament back in 2001.

According to Moore’s management, it is understood that Billy has been looking to branch out into other areas, but the Origin legend could lose the majority of his media and speaking gigs due to his refusal to say the “Queenslander” line.

Moore maintains he’s happy to speak about the North Sydney Bears, Origin games, Australian Tests and even tales from his restaurant, Augello’s but he won’t say the catchcry which has put a smile on so many faces since 1995.

His management remains hopeful that Moore will come to his senses closer to the kick-off for the 2022 State of Origin series.