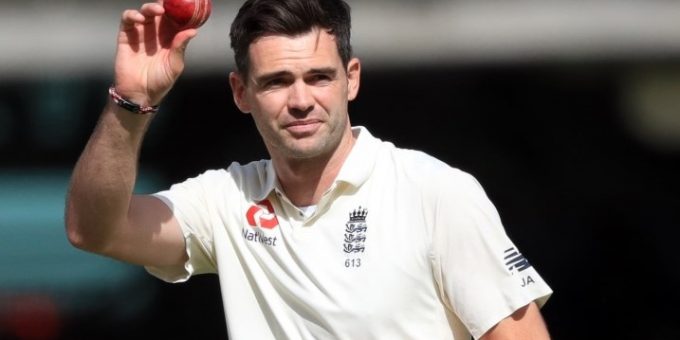 On a day in which the Kiwis again impressed with the bat, with Daryl Mitchell falling just 10 runs short of a double century and Tom Blundell also making it into three figures with 106, the tourists largely had the upper hand in Nottingham.

However, by the end of play, the hosts had rallied to make a good start in their first innings reply, with Ollie Pope (5/6 Over 84.5 Runs) reaching the half-century mark when making 51 not out, and the second Test looks finely poised on what’s clearly a good pitch for batting after two entertaining days so far.

England are 463 runs behind New Zealand’s 553 all out with nine wickets in hand. The only wicket to fall was when Zak Crawley (4) edged Trent Boult behind, although Alex Lees, who ended the day at the crease on 34 not out – his highest score in Test cricket – was dropped on 12 by Mitchell at first slip to prevent New Zealand from making further inroads.

Earlier, James Anderson (pictured) took 3-62, while Stuart Broad, skipper Ben Stokes and Jack Leach all took two wickets on a day in which the tourists had enjoyed themselves with the bat on an agreeable surface, building on their score of 318-4 from the first day to pass 500 comfortably.

England batting coach Marcus Trescothick was pleased with his side’s display though, telling BBC Test Match Special: “It was good to see the guys having a good time out there and scoring runs and getting us into a good position after a couple of tough days out there.

“We hope for a big first innings score. The odd occasion where they get the ball in the right area it does a little bit. You still have to work hard despite it feeling like a good pitch. You can be challenged if you don’t concentrate. We have to come back tomorrow and do what we’ve done tonight.”

Trescothick also paid tribute to Lees (5/6 Over 63.5 Runs), playing in just his fourth Test, as he quickly racked up his score of 34 to set himself up for a potentially much bigger contribution on Sunday.

He added: “He’s a rock and very solid. He’s fitting into the team really well. It’s just about getting the balance right and giving these players time to grow their skill and grow into the Test arena.”