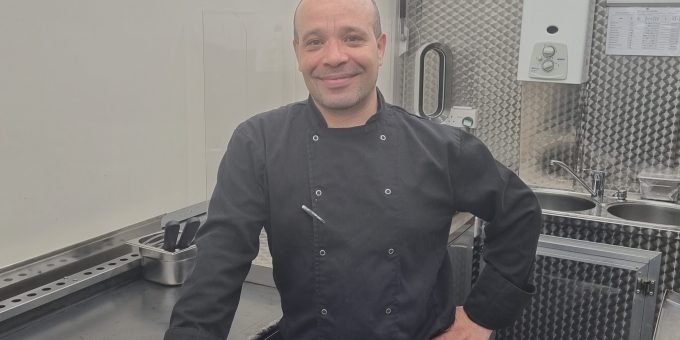 Chef Patrick Aguilar is all smiles – and not just because he’s a Liverpool supporter!

The 45-year-old Betfred regular cooked up an extraordinary Lucky 15 bet in just five minutes while having his Saturday morning coffee.

He wagered £4.50 that Leandro Trossard would score first for Brighton at Spurs and Jan Bednarek would open the scoring for Southampton against Arsenal in the Premier League – while he also picked out Liverpool’s Ibrahima Konate to net first in the FA Cup semi-final tie against Manchester City at Wembley.

He got it wrong on his fourth and final selection, thinking that Paul Pogba would score first for Manchester United at home to Norwich – and if that had come in, his windfall would have been £72,000.

Chris, a proud father of seven, said: “I always bet within my limits but like to have a dabble every day, which I’ve been doing for 10 years at Betfred.

“I was looking at the games when I was having my morning coffee on Saturday and thought Konate would score first because he’s been in good form – and then I thought of Trossard.

“I decided to go for a Lucky 15 and couldn’t make my mind up between Ronaldo or Pogba to score for United… I got that one wrong!

“I often choose defenders rather than strikers, which is why I also went for Bednarek.

“It is all very exciting, except for what I’m going to do with my winnings! As a freelance chef I do my own tax returns, and I owe the tax man £4,000 so that’s where that’ll be going.

“I have, however, been able to give the kids and the missus a treat during the Easter holidays.”

Jubilant Patrick is now predicting at least a treble for his beloved Liverpool, believing that if they don’t achieve a clean sweep it’ll be the Premier League that Manchester City will pip them to.

Betfred boss Fred Done said: “As a lifelong United supporter who is still very bruised about Tuesday night’s mauling at Anfield, I’ve got to force myself to say congratulations Patrick.

“He’s served up a big win here, that’s for sure – and what a pity most of his windfall is going to the tax man.

“It’s a remarkable wager, very much proving that you can win big from a small stake at Betfred.”