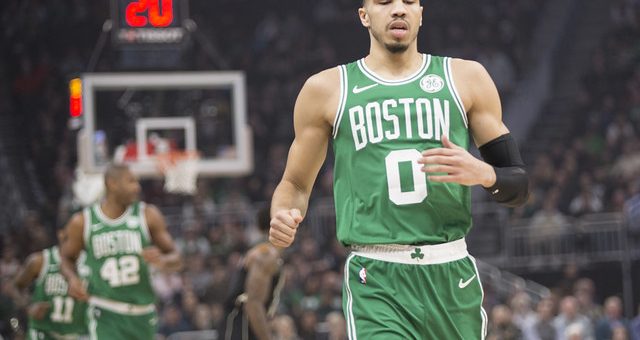 Jayson Tatum’s on-the-buzzer score edged Boston Celtics to a 115-114 win over the Brooklyn Nets on Sunday night to give them an early advantage in their NBA play-off series.

Boston lead 1-0 in the best-of-seven first-round series as the Eastern Conference second seeds had Tatum, who scored 31 points overall, to thank for victory as the opening weekend of the NBA playoffs concluded.

It was a feisty encounter at TD Garden as Kyrie Irving inspired the Nets in a fourth-quarter comeback against his former team. Irving, who was booed by the home Celtics fans throughout, hit 39 points and reacted afterwards to the hostile treatment dished out his way.

In quotes carried by BBC Sport, he said: “I’m used to all these antics. It’s nothing new when I come into this building what it’s going to be like – but it’s the same energy they have for me, I’m going to have the same energy for them.”

Game 2 between the Celtics and the Nets takes place at midnight on Wednesday (UK time) with Boston 8/13 on the Money Line and Brooklyn 13/10.

Hawks star Trae Young, who was restricted to just eight points, praised Miami’s display but admitted his side were jaded after they came through two tough play-in games last week to make the play-offs.

He said: “You definitely feel the heavy legs, but you have to give them credit. They came out aggressive, they came out with a lot of energy.”

On Monday night, the play-offs continue as the Philadelphia 76ers play the Toronto Raptors (76ers 3/10, Raptors 5/2 – Money Line) with the Raptors trailing 1-0 in the series and the Dallas Mavericks will aim to respond against the Utah Jazz (Mavericks 15/8, Jazz 5/12 – Money Line) as they’re 1-0 down following Saturday’s opener.

Golden State Warriors are 1-0 up against Denver Nuggets ahead of their Chase Center meeting at 03:00 on Tuesday morning (UK time) with GSW 1/3 in the Money Line to make it 2-0 with Denver 9/4.