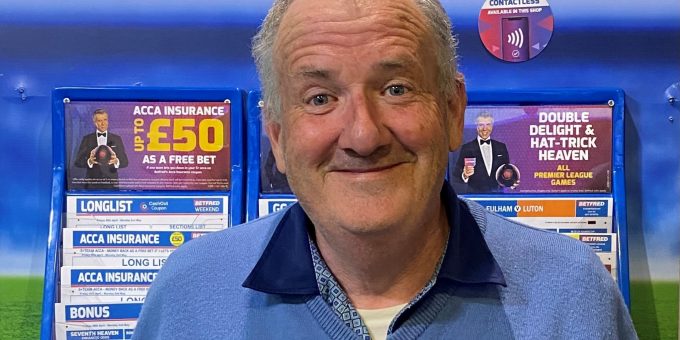 It was a case of away day joy for Betfred regular James Melvin who won £24,448 on Saturday.

He picked NINE away wins in his regular football accumulator placed at the Betfred shop on Upper Aughton Road in Birkdale, Southport.

The afternoon wasn’t without drama, however, for there were late goals galore that kept his bet alive – including for West Brom at Reading in the Championship, Burnley against Watford in the Premier League and Elliot Anderson’s 95th minute winner for Bristol Rovers against Rochdale in League Two.

The Rovers’ victory came despite Joey Barton’s team being 2-0 down at half-time at the Crown Oil Arena.

James also opted for Brighton to beat Wolves in the top-flight and Huddersfield to triumph at Coventry in the Championship – while the lucky winner had Accrington Stanley, Sunderland and Wigan to defeat AFC Wimbledon, Morecambe and Shrewsbury respectively in League One.

Finally, he picked Leyton Orient to get all three points against Crawley Town in League Two.

It’s not the first time grandfather James, a retired shop owner, has taken Betfred to the cleaners, for in October last year he picked up £30,800 from three £20 football accumulators.

He’s been using his winnings to pay for double glazing, a new bathroom and rendering at his four-bedroom, semi-detached house in Birkdale.

“It took me two minutes to sort out Saturday’s winning coupon,” he said. “I was chatting with the shop manager Mike Kenyon about the fact Brighton have been doing well and Wolves’ struggles, so I put them down first and then just went with another eight away wins.

“We do like going to Scotland and Ireland, so maybe we’ll be going there a few more times now Covid looks like it’s over and done with.

“I don’t need a new, top-of-the-range car because I like my Ford Fiesta – it’s a great car, and I have no intention of changing it. The wife said she doesn’t want a present either, and that I should keep the money.

“As well as playing golf, I’m in Betfred most days, and at the moment I think it’s fair to say I’m on something of a good run!”

Betfred boss Fred Done said: “You get some unusual bets at this time of the year. Teams seem to be leaking plenty of goals, with some having nothing to play for while others chase titles, promotion and try to avoid relegation.

“Congratulations James, who has done tremendously well not just on Saturday but last October as well.”