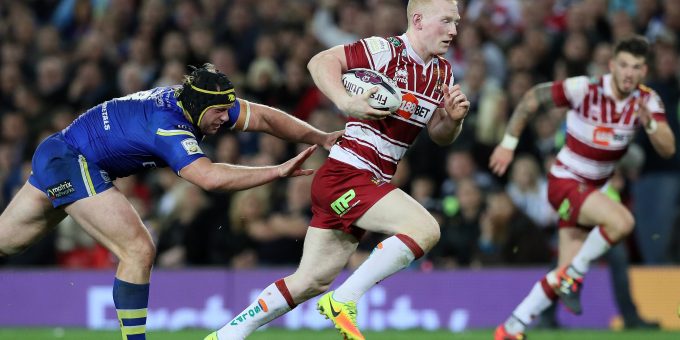 Wigan Warriors will face Huddersfield Giants in the final of the Betfred Challenge Cup after they beat St Helens and Hull KR respectively on Saturday.

The Warriors (9/2 Grand Final Winner) put in a remarkable first-half performance to go in at the break with a 14-0 advantage, courtesy of tries from Liam Marshall, Cade Cust and Liam Farrell (pictured).

Inevitably, 2021 Challenge Cup winners St Helens (10/11 Grand Final Winner) fought their way back into the contest in the second half and they struck back with tries from Konrad Hurrell, Jonny Lomax and James Roby within the opening 10 minutes.

It appeared that Saints, with momentum on their side, would go on to seal a memorable comeback victory, however, Marshall struck against the run of play to score his second of the game and wrap up a 20-18 win for Wigan.

Warriors head coach Matt Peet said: “Credit to the resilience of the group and the trust they have in one another.

“You’ve got to judge yourself against the best teams, and Saints are the best.”

Wigan, beaten by Hull FC in their last Challenge Cup final appearance in 2017, will take on Huddersfield Giants in the final at the Tottenham Hotspur Stadium on May 28.

Both semi-finals took place at Leeds United’s Elland Road and the Giants made easy work of Hull KR in their tie to round off the day, earning a 25-4 win.

Josh Jones, Louis Senior, Jermaine McGillvary and Owen Trout crossed to put the Giants 24-0 ahead before Theo Fages added an extra point via a drop goal.

KR did manage to get on the board in the closing stages with Shaun Kenny-Dowall crossing following a breakout from Ethan Ryan.