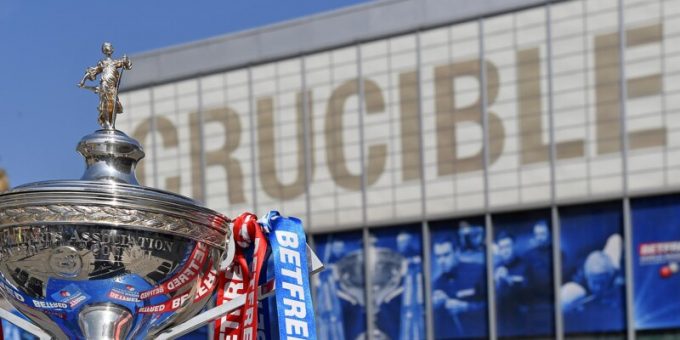 Indulge me, if you’d be so kind. This is more of a personal note than anything else. The ramblings of a sports fan first, scribbler second. An excited, expectant sports fan at that. Dear reader – I’m about to go to Sheffield.

Back in the dark ages, I had friends who studied at the Steel City’s University. Trips across the Pennines often ended foggily, sleeping on unforgiving floors in various halls of residence. Many a trip to the legendary Uncle Sams Chuck Wagon on Ecclesall Road helped soak up the wet stuff.

I’ve been to Bramall Road, and Hillsborough. Saw Tony Currie in his pomp. Great days. BUT – I’ve never been to the Norfolk Street venue that’s been home to the Betfred World Snooker Championship, since 1977. The Grade II listed building that opened some six years earlier – The Crucible Theatre.

It’s around this time that I became interested in snooker I guess. BBC2 in particular was doing a great job in promoting the sport (Pot Black), and colour telly was a godsend. Potting several successive ‘greys’ was never going to cut it.

‘Whispering’ Ted Lowe was right up there with the commentating Gods, and a host of exciting stars were busy making, or cementing, their names. Ray Reardon was a carry-over from the past. Relentless, dignified. Fred Davis and John Pulman, too.

John Spencer was champion in that first Crucible year – and losing a thrilling last-16 tie 13-12 to Doug Mountjoy was a ball of fire from Northern Ireland by the name of Alex Higgins (pictured, below). The Hurricane lived in Cheadle, and later moved to Mottram St Andrew, close to where I resided in Macclesfield, Cheshire. A Manchester lad, I’d moved as a boy to Macc, and grew up there.

Alex won in Sheffield in 1982. He was part Ronnie O’Sullivan and part George Best, with a bit of Paul Gascoigne thrown in for good measure. I played in a match behind him at Stockport Golf Club around that time, and he was a frequenter of local nightspots like Silklands, at Macc Town FC. We saw plenty of Alex both on and off the table.

A particular semi-final win he engineered at The Crucible against Jimmy White in ’82 is the most dramatic and breathtakingly brilliant match I’ve yet had the pleasure to behold. 16-15 was the outcome – reminding us too that the supremely gifted White had the most wretched luck in the Steel City.

Steve Davis, especially in THAT final against Dennis Taylor, contributed spectacularly to Crucible folklore. Barry Hearn was the brilliant Svengali who nurtured Davis, as he did snooker in particular and sport in general.

Stephen Hendry thrilled us all over so many memorable years, and remains an annual fixture in Sheffield in the comms boxes alongside other green baize notables such as John Virgo, Taylor, Ken Doherty, John Parrott, Davis, and others.

Our own Mark Pearson and Matt Hulmes produce fantastic content right now for Betfred social media platforms, with ready access to the game’s 21st century standouts. BUT – dear reader. I’ve never been. That will be put right however this coming Saturday afternoon, as I’m attending one of the semi-final sessions. I absolutely can’t wait.

I’ve been lucky enough to have been to some of our great nation’s iconic stadia, and events. Lord’s, Twickenham, Wembley, Royal Ascot, York, Goodwood, Newmarket, most Premier League grounds – and soon I’ll be able to chalk off The Crucible, Sheffield.

Rub shoulders with ghosts of players I recall from over a period of nearly half a century, whilst marvelling at the talents on show today.

One more to tick off the old bucket list. Bumping into the great Tony Currie might be a longshot, but hope springs eternal.