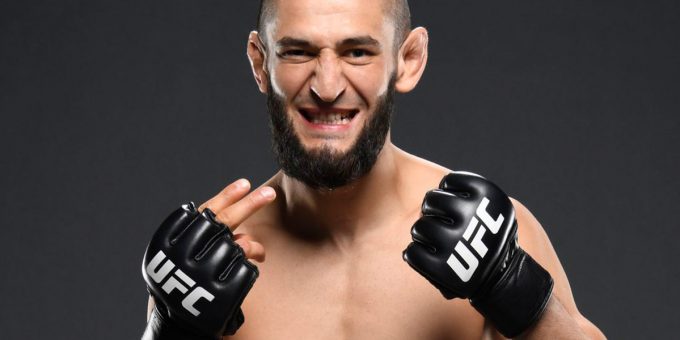 There may not be a more hyped fighter on the UFC roster than Swedish Welterweight Khamzat Chimaev.

He enters his fight against Gilbert Burns at UFC 273 undefeated in 10 professional fights, four of which have been in the UFC promotion.

His last three wins have all been first round finishes and there are many that believe Chimaev will be a future UFC champion.

Khamzat Chimaev may be the most hyped fighter in the entire UFC!

Here’s 10 things you may not have known about the #UFC Welterweight in the lead up to his fight with Gilbert Burns at #UFC273 this Sunday.https://t.co/HKbJqbdbhV pic.twitter.com/prDZlnjgci

1. He Was Born In Chechnya

Khamzat Chimaev was born in Chechnya on May 1 1994 and started wrestling at the age of five and won a bronze medal at the Russian National Championships at junior level.

He immigrated to Sweden at the age of 18.

He is 24-0 in his freestyle wrestling career including a win over fellow Scandinavian UFC fighter Jack Hermansson in November 2021.

Undefeated in three amateur fights and now 10-0 in pro MMA.

3. Conor McGregor Is An Inspiration

Chimaev decided to give mixed martial arts a try not long after catching Mcgregor vs Aldo on a break while he was at work in 2015.

He started training MMA at 24 years of age.

That’s less than four years ago.

Let that sink in.

The noticeable scar on his lip was the result of a fall that he had when he was two years of age.

He fell down on some concrete steps and left him unable to breathe correctly through one nostril.

5. Darren Till Is His New Protégé and BFF

Having lost four of his last five fights, Scouser Darren Till needed a change and he looked straight to the most dangerous Welterweight in the UFC.

Chimaev has created a Youtube channel where you can see Till shadowing his every training session as well as their flourishing friendship.

6. He Is A Natural Middleweight

Chimaev won National Gold Medals in wrestling at 190 and 202 pounds.

Before moving up in weight in 2019, Burns fought at Lightweight (155 pounds).

We haven’t seen it inside the octagon because all of his fights have ended so quickly but from all reports, his cardio is through the roof.

Like we said in the opening, the rumours circulating around this guy are coming thick and fast, whether it’s crazy sparring sessions or him rag dolling much heavier opponents in wrestling.

The hype is real.

8. His Confidence May Be His Greatest Weapon

How could you not be confident when you have never lost a round in your life.

He picked up Li Jingliang in his last fight at UFC 267, carried him over to President Dana White, and proceeded to have a conversation to his boss while doing so.

Then there was that time he had time to put his mouth piece back in before choking out his opponent.

His nickname is Borg which means Wolf in Chechen.

It also refers to a sub machine gun which was used in Chechnya’s conflict with Russia during the 90s.

10. His Numbers Are Unrivaled

Chimaev landed an astounding 118 strikes in the first round in his UFC debut.

He broke the record for the quickest turnaround between UFC wins in the modern era. He beat John Phillips by submission and then Rhys McKee by TKO ten days later.

He is tied for the third fastest KO in UFC Middleweight history. He beat Gerarld Meerschaert in just 17 seconds.

He is the fastest to record three wins in a row. It took him 66 days.

He landed 196 significant strikes and absorbed just two in 2020.

This is the second best ratio in UFC history behind Royce Gracie at UFC 1 in 1993 who landed 19 and absorbed one.